For official travel site of the Czech Republic see #VisitCzechRepublic Prague's first inhabitants arrived during the early Stone Age. The hills over the Vltava (Moldau) were first settled by members of an unknown tribe. Their descendants gradually settled the entire area around the Vltava meander, the shape of which - that of the letter P - symbolized the settlement's future name.

Archeological finds of jewels from the prehistoric era that are similar in style to those from the Great Moravian Empire, confirm the existence of a Slavic settlement. 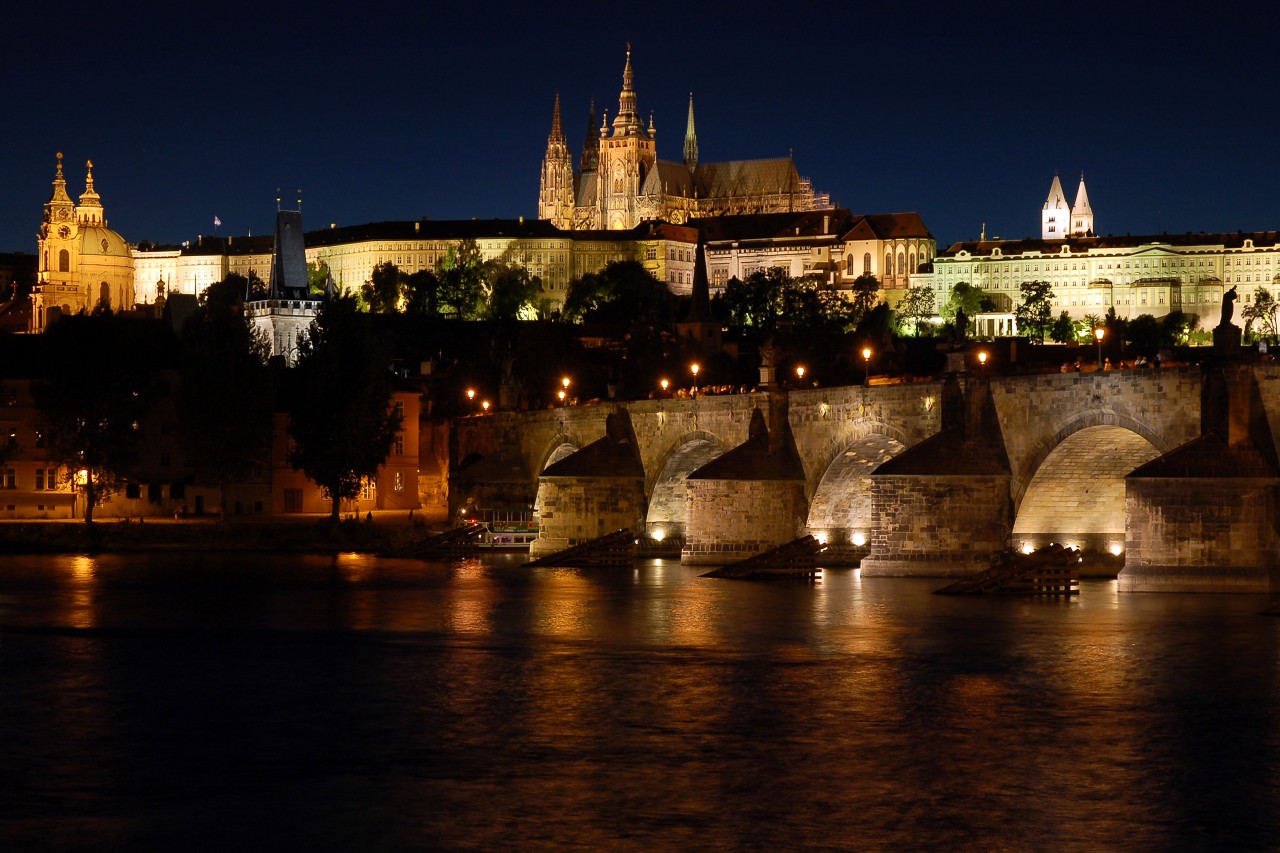 The foundation of Prague Castle, the building of the Christian Church of the Virgin Mary at its center, and the promotion of the Castle as the chief seat of the Přemyslid dynasty gave the Prague basin settlements a new mission. Prague Castle became the heart of the Czech Principality; the rise of the Přemyslid princes to power, along with an advantageous position at a crossroads of trading paths over the river, made Prague the most important place in the country.

The metamorphosis of the fragmented agglomeration below the castle into a fortified and privileged medieval city took three centuries. The importance of the Castle settlements was to a great extent the work of Prince Bořivoj, the first known Czech ruler. Prague became a city at the end of the 12th century. The Old Town of Prague came into existence in 1220 and joined with the Lesser Town at the end of the 13th century. At the beginning of the 14th century, another Prague town appeared: Hradčany (the Castle Quarter). 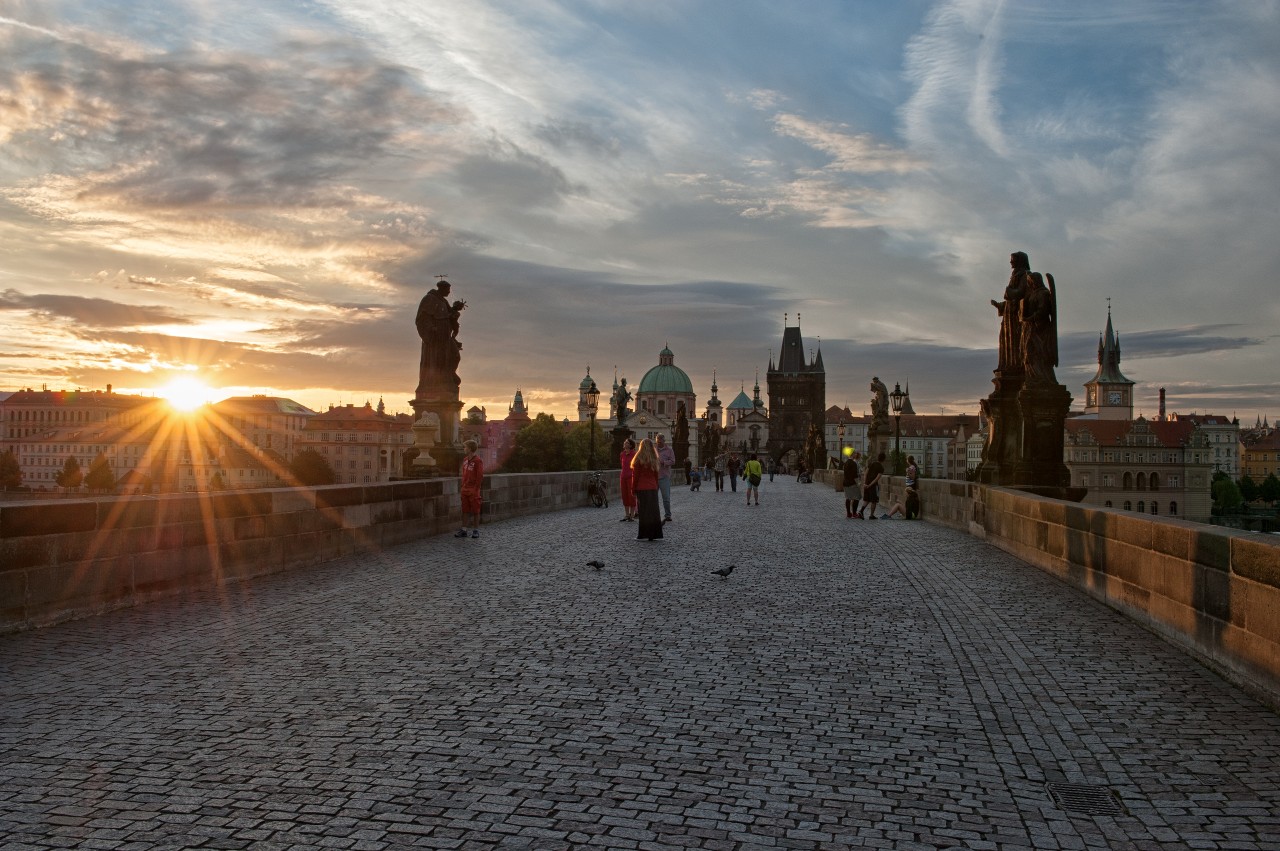 A period of great prosperity and growth came with the rule of Charles IV (1346-78), who made Prague the greatest center of the European empire. After Rome, it was the second Christian metropolis in Europe. Charles IV built the stone Chares Bridge (1357), founded Charles University (1348) and, during the same year, established Prague's New Town. After his death, his son Wenceslas IV took over and Prague becomes one of the most beautiful and splendid towns in the whole world, fully deserving of its epithet, "Rome of the North". Its appearance did not change for another 200 years.

It was only during the Jagiellonian era that Prague completed its Gothic evolution. The rule of the Habsburgs brought to Prague the spirit of the Renaissance, and Emperor Rudolf II added to its luster by making it the imperial seat of the Holy Roman Empire. The series of heavy blows that fell on the Czech lands in the wake of the Protestant Czech estates' defeat in the Battle at White Mountain (1620), did not spare Prague. The Habsburg victory installed Ferdinand II on the Czech throne and the city became a provincial capital, without power or importance. Even the first woman on the Czech throne, Empress Maria Theresa (1740-80) didn't do much to raise hopes of its revival. The rule of her son, Josef II, marked the beautiful city by its fervent abolition of convents, monasteries, and churches, as well as by intense national repression.

Spreading re-catholicization brought with it the construction of new churches, convents and monasteries in the Baroque style. In the new fashion, a number of palaces were also built, many of which still help define the appearance of the city. After 1784, in the tumultuous period following the unification of Prague's many municipalities, a new style, that of burgher-like Classicism, appeared.

The Romantic era blew a breath of fresh air into Prague's gardens and parks. 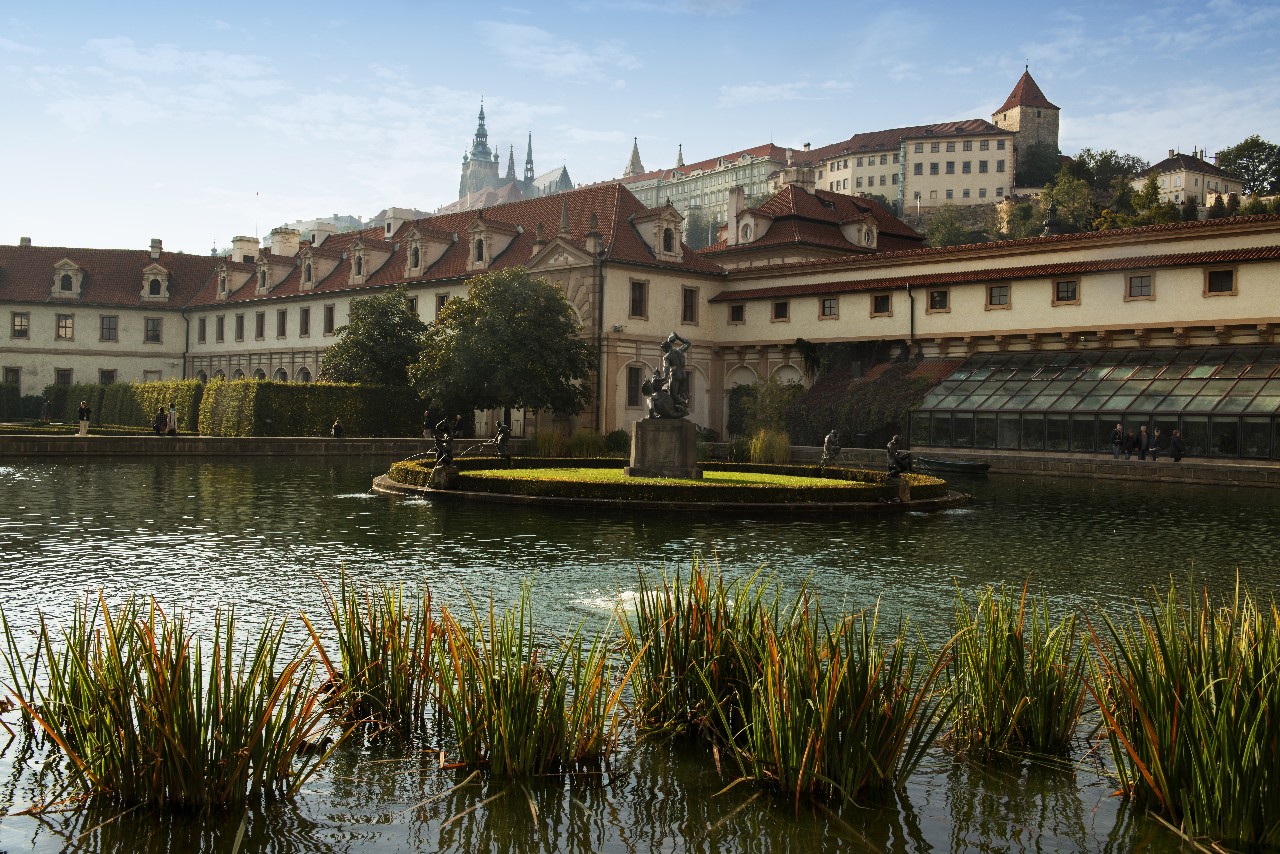 The mid-19th century brought a revival of previous styles, which left its mark all over Europe, Prague not excepting.

The Neo-Renaissance style symbolized the rebirth of the Czech nation and found most use in the construction of buildings closely associated with Czech national culture (e.g., the National Museum, the National Theater, the Rudolfinum.) At the same time, Prague said farewell to its old fortifications. Around the year 1900, Prague's population approached 200,000 and the prevailing style was Art Nouveau. The city then was among the largest in the Austro-Hungarian Empire. 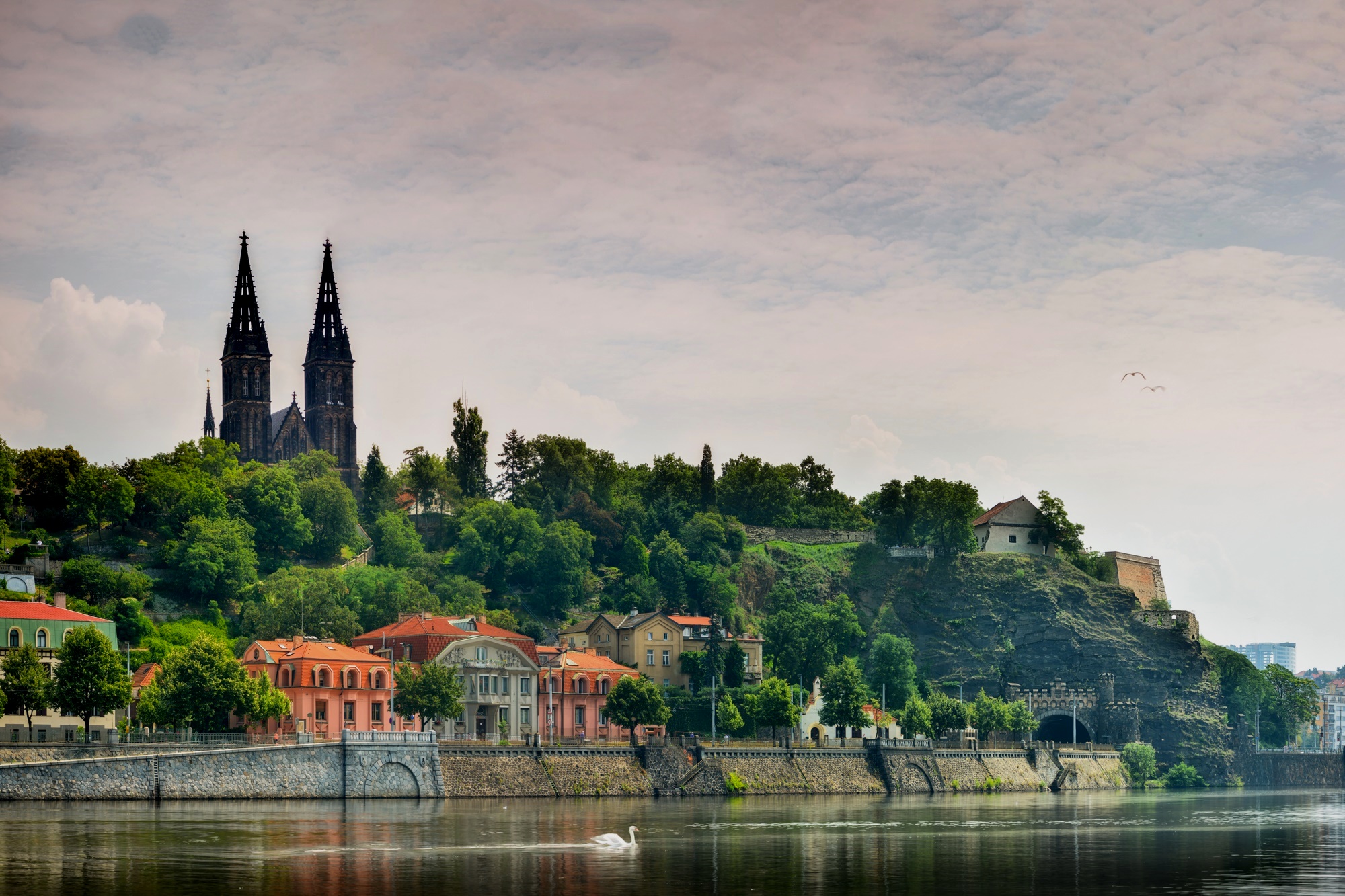 With the dawn of a new era, new styles also arrived: functionalism and constructivism. A unique group of Cubist houses can still be seen at the foot of the Vyšehrad cliff near the river.

World War II and the Nazi occupation halted the development of the Czech metropolis. The country's newfound freedom was quickly suppressed by the nascent communism, which proceeded to inflict on Prague five decades of "building Socialism."

At the end of the last century, Prague's historical center was included in the prestigious UNESCO list of World Heritage sites. The city entered the new millennium as a self-assured, proud metropolis, blessed with an ancient heritage as well as new, exciting works of architecture. 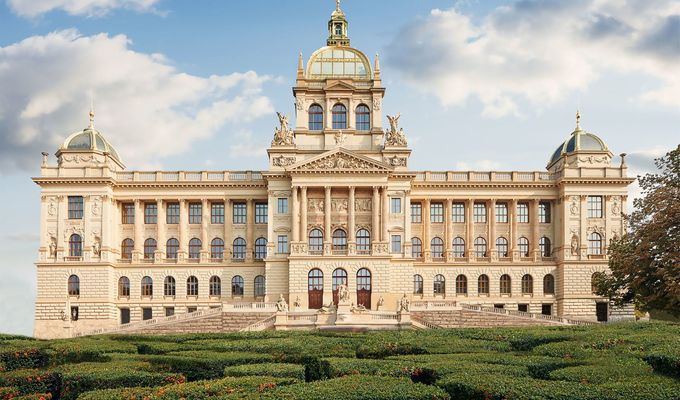 Church of Our Lady before Tyn 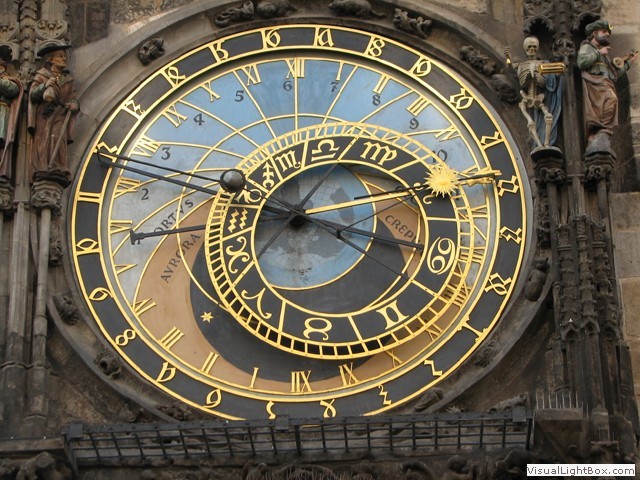